Home / Board Of Directors / Durmuş Topçu 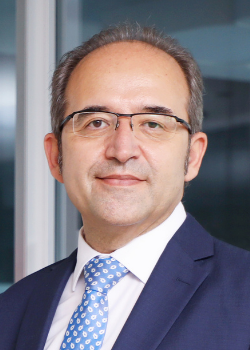 Durmus Topcu is the President of Dow Turkey & Central Asia, the Regional Commercial Director of Dow Construction Chemicals in IMEAT and a member of the Dow Middle East, Africa, Turkey and India leadership team.

Dow combines one of the broadest technology sets in the industry with asset integration, focused innovation and global scale to achieve profitable growth and become the most innovative, customer centric, inclusive and sustainable materials science company. Durmus is responsible for defining and driving the strategies of the region, and for collaborating with commercial and functional teams. In his business role as Commercial Director, he is also responsible for driving the business’ growth strategy in the IMEAT region by providing innovative solutions and addressing market needs.

Durmus joined Dow in 1997 as Technical Manager for Dow Building Solution business and held several chairmen positions for industry associations and developed new regulations for the insulation market before taking on a new role as Application Development Manager in Dow Germany. In 2002 he relocated back to Istanbul to become Commercial Manager for Dow’s Building Solutions Business which he helped establish in Turkey. Additionally, he acted as board member for MARDAV JV in Turkey.

In January 2020, he was named as the President of for Dow Turkey & Central Asia in addition to his current role and responsibilities.

Durmus holds a diploma in Architecture from Istanbul Technical University and a Master’s degree from the Technical Sciences Institution of I.T.Ü.